Happy new year to everyone, I hope you all had a Christmas / new year. I’ve been taking some much needed down time, disconnected from the world in a remote forest doing some real world survival, and am now recharged and ready for the next phase of Hurtworld.

I’ve got some exciting things cooking for the next content patch, which focus on shaking up the raiding metagame but first things first I will be squashing the remaining bugs and gameplay issues that have come up over the last few weeks.

My current high priorities are:

I will hopefully have these issues sorted in a patch to go out before the wipe this Thursday, I don’t expect this to include a forced wipe.

Once I have the bugs under control the focus for the next content patch will revolve around making end game raid mechanics more balanced and interesting. This has always been a hard thing to achieve while players are able to build themselves or their totems in with stacked walls and is definitely not how the systems were designed to be used.

Changing The Removal Hammer
For as long as players have the freedom to build and remove any wall as they please, doors become only useful for airlocks, the 50% cost of building and removing a wall isn’t nearly enough to compare to the security gains you achieve by building yourself in. This needs to go. The current prototype design is that construction pieces can only be removed during the grace period soon after they are placed to correct mistakes (say 5 mins). This will force good placement of doors, misdirection of pathways through fake doors, and maze structures to be key to building a secure base. At this point doors and walls being significantly different in use, doors will likely become the weak points as a trade off for providing more accessibility. Blowing through a weak door or a strong wall will be a key decision in raiding a base.

Renovation Drills
Locking walls in place after the grace period makes renovating your base a very expensive exercise, you would need to c4 your own base just to remove a few walls or doors. This obviously isn’t feasible, but this leads us to a clue as to how to solve it. We create a new type of wall removal device (like c4 or raid drill) that can only be used inside your own base for a tiny fraction of the cost. The main cost we want to add to this device is time. This renovation drill could be cheap and quick to deploy, but take a good amount of time (say 30 mins) to actually complete its task of removing a build component. This would add a massive amount of inconvenience cost to using walls instead of doors to build yourself into a vault as when you login next you have to wait the removal time for each layer of wall you build yourself behind. This will also create a much higher permanence to bases. Raiding a base and being able to make it vanish in seconds isn’t a great mechanic and often makes it hard to see what happened to your hard earned fortress. Being able to come back and see the shell of your remaining base, or the new owners enjoying it should create a much richer narrative for everyone in the server.

Beyond Walls
Another mechanic I will be experimenting with internally will be the ability to reinforce specific parts of your base that show no visible signs from the outside, allowing defenders to strategically choose the parts of the base they think raiders will exploit to get inside and by nature also leave other parts vulnerable. The hope is that this will add to complexity of the metagame by adding an extra layer of subterfuge to the building process. Raiders will need to decide whether to take the obvious route into the base, or try to find a less obvious weak point.

We still need to a proper design pass on these ideas, things may change before implementation. I plan on running some community driven raid events as test cases to tune the new features before sending them out into the wild.

I don’t have a release date for this patch yet as its a while off, will re-evaluate once we get the bugs under control.

In just under 2 weeks time, December 10th, Hurtworld will be launching out of Early Access. This will include a patch introducing the new hand held rocket launcher, a new body kit for the Roach, and most importantly tons of bug fixes and polish.

We decided not to go too heavy on the content for this patch and focused on long standing bug fixes to ensure we don’t compromise on the stability of the game as we exit early access.

What does exiting Early Access mean?
For us Early Access isn’t much more than a marketing tag, one that says there might be some rough edges and missing features right now, maybe check back later if you’re not into that sort of thing. At this point we feel we have achieved everything we initially set as a list of goals when we started early access 4 years ago. While we don’t see the game as ever “complete”, we think the current level of quality and set of features is indicative of what we want to maintain going forward.

Rest assured we will continue to working on Hurtworld for as long as there are people playing it to ensure the game remains a stable multiplayer experience for years to come.

Thanks to everyone who has come along the ride with us, lets get hype for a big launch! 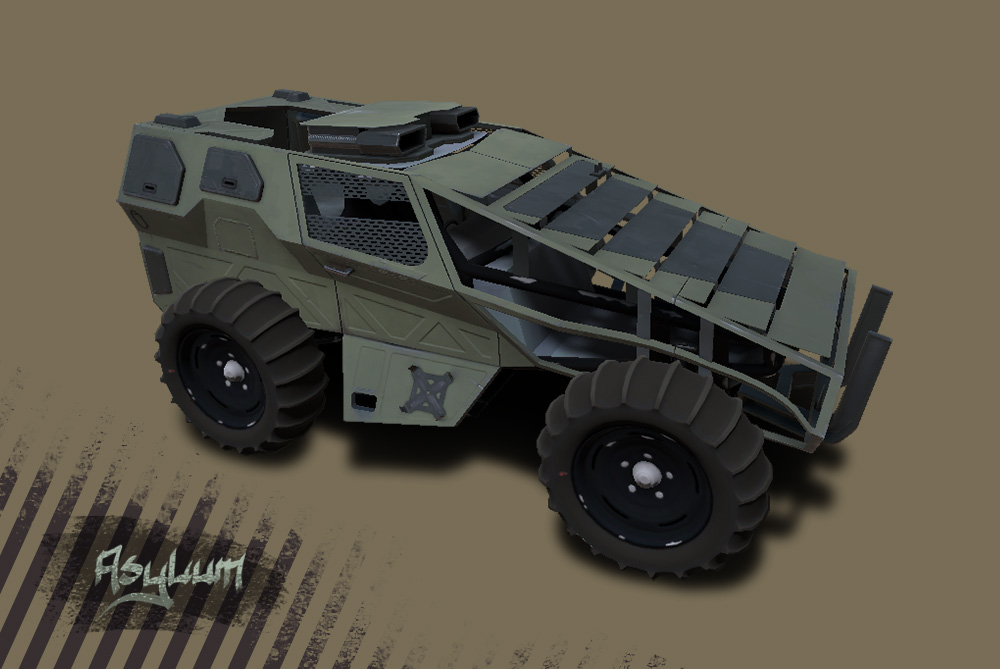 This bad boy has a semi APC, semi Lamborghini inspired design. Strange combo, but I really like how chunky it is. Looks very military and utilitarian. I’m not sure how it’s going to fit into gameplay and what it’s rarity will be but it will go into the next release.

This should keep the driver and passengers very well protected from gunfire, except at the front. If you want to play chicken and try shoot the driver out before they run you over, go for it!

I can’t wait to drive this bad boy.

Work is progressing well on the things I spoke about in the last dev blog. So far I’ve mainly been working on long standing annoying bugs that I’ve put off for ever as they didn’t seem that important, I’m still not entirely convinced that this is time well spent but also can’t picture exiting early access with a bunch of broken stuff still in the game regardless of whether it actually affects anyone’s enjoyment.

Progress on the rocket launcher is going well, delving into animation for the first time since Dazzler was part of the team has been a mission, I kinda wish we did it earlier as we’re regaining a lot of skills that would have been handy while choosing which content to develop over the last couple of years.

Rock Exploits
I’m happy to say with some new detection techniques and some heavy bans we have completely eradicated people using rock exploits from the game. Its an ongoing fight but people seem to have finally gotten the message that exploits aren’t going to fly anymore.

When Update
The next update will be the launch from early access, early access exit, V2 Version 1.0 whatever you want to call it. We kinda put ourselves in a corner naming and update in Early Access V2. Hurtworld V2 1.0 sounds dumb enough to work lets go with that. This patch won’t be going out until the end of November, firstly because we need the time to iron out remaining bugs and finish up some content, but also because there is a ton more people playing games around end of year holidays and its a good time for a launch. I personally welcome the breathing space.

Server consolidation
With the quiet of that breathing space comes a decent drop in player numbers as we would expect. Doesn’t make sense to have tons of half empty servers, so we will be consolidating things next wipe. Servers will be less granular region based and more varied on things like wipe times. Wipe wise I will probably create a longer wipe time server as it will be lasting a couple months before a forced wipe.

I’ve been working on this beast the last few weeks. We will soon have a Rocket Launcher! I’ve been hard at work designing this bad boy which is loosely based off 2 existing rocket launcher designs. We wanted to create something that looks like it’s been manufactured but with our own design twist. It’s been a pleasure to work on and cam up nicely. Spence is in the process of finalising the function and Splatt has been slaving away on the animations so it looks right when used by the player in the game.

I also did some minor project polish on some items in the game like Icon poses and world item scalings. Some of the world items were ridiculously large, so I sanitised them a bit.

I have spent the last month diving deep into our players rig so that we can get a new weapon in the game. The rocket launcher. Our players rig was created before my time and has lay dormant for as long as I can remember. After doing the missing animations for the creatures I decided I could tackle the player rig. It was extremely difficult and there were times I felt like maybe I had made a mistake accepting this task but after hours of slowly chipping away at each little problem we actually have new animations for a new weapon. They may not be the greatest animations as I am not an animator and even if I were, I wasn’t exactly working with the friendliest of rigs but hey, they work. So now I’m just compiling a list of which ones look the worst and going to start polishing them up.

I’m also fixing a few thing with the map, certain towns not having events, floating rocks, things like that. Trying to get any manual fix up work taken care of with the stamping process, which I’ve done before but obviously as we add new stuff new manual work pops up.