Hey folks – we’ve got 22 days until Hurtworld hits Early Access on December 4th, so we’re all flat out adding in as much juicy content as we can, fixing bugs, and getting ready. Here’s what we’ve been up to:

This week I finally got around to implementing some long awaited new weapons, the Spear and the Shotgun. Spear can be used in stabby stabby mode or thrown like a javelin. Wherever the spear lands it will stick and can be reclaimed. I also created a test build where spears stuck in walls could be stood upon. This makes for some cool emergent behavior and a bit of a nightmare to balance so I think I’m going to hold off on that one until we know how it will affect climbing bases etc.

The shotgun is the first weapon with actual inaccuracy which has been something I have needed to get around to for a while. The challenge posed was that our server and client both simulate the projection of bullets to prevent cheats, and this simulation needs to be exactly in sync otherwise nothing works. We need the client and the server to both generate the same pseudo random number for each bullet fired. Usually this is done by seeding the random function the same, however pre-sharing this value on each bullet for an automatic weapon is a decent bandwidth overhead.

This problem is solved without overhead by using the time tick the bullet was fired as a random seed, this paves the way for me to add recoil and movement inaccuracy to all weapons which is desperately needed. (Y)

Here are some of the weapons in action (Our resident AV guy Chris is away this week, excuse the quality):

I also built the Vehicle attachment system to support the awesome vehicle customizations that Mils has been designing. It works mostly like gear on a player, each item you equip changes the look and behavior of the vehicle. As everything is just item based, we can do some cool stuff with item transitions like flat tires, overheated engines based on external environmental factors. Likely I will run the engine like a campfire, giving off heat to itself. If it gets too hot for too long to transition to a less powerful engine and start billowing smoke.

The awesome part of all the possibilities is that we get a lot of stuff for free by re-using the existing equipment framework used on the player, and allows for lots of emergent behavior once we flesh out more effects.

Currently any wheel can be put on any vehicle slot, which makes for some weird looking (and handling) designs and some badass ones. I am yet to solve the wheel being too big for the chassis, hopefully I won’t have to put a radius limit in, I can probably just jack up the suspension if the wheel is too big.

I have been creating more car attachments this week, here you can see one of the new skins on this new shell. This shell’s name as a whole is currently the ‘Bogan Supreme’ Inspired by the Holden Panel Van, which for non-Aussies is an Australian iconic car of the 70’s & 80’s.
The parts are all swappable and can be combined with all the other components from the other shell sets. Also you can see the interchangeable wheel sets, which players will be able to swap to create a truly unique, if not, ridiculous, or cool looking vehicle. We wait with anticipation to see what oddities you all come up with.

This week I have been creating some extra environment assets to help with player navigation and to add shape contrast to various biomes. And I also did more of a forest/bigfoot type skin for the Yeti 😉 I’ve been busy adding in some analytics in preparation for release, so we can tell things like if the game is performing ok, how long people are playing/living for, and if crashes happen what might have caused them. Hopefully we can use this (completely anonymous) data to fine tune and balance the game. 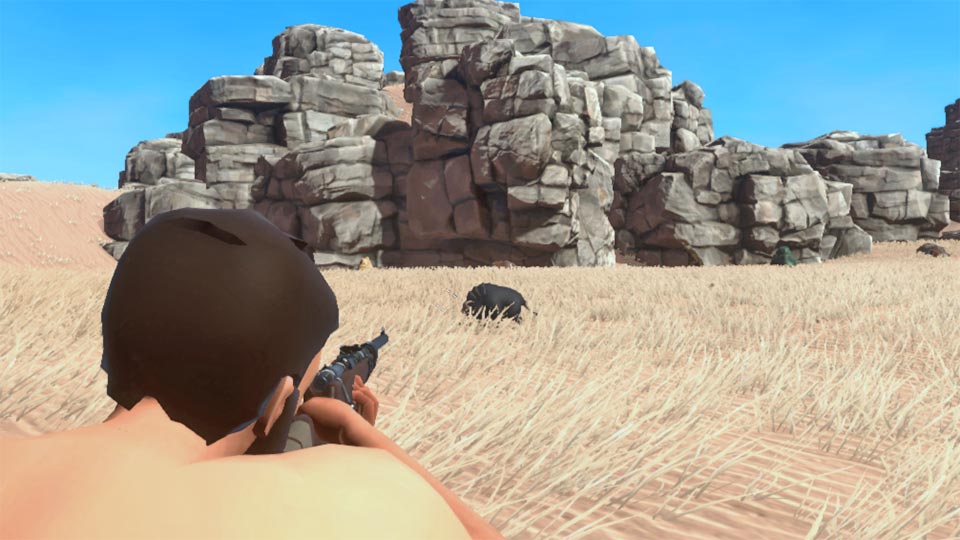 We did finally lock down a more concrete Steam EA release date. If everything goes to plan Hurtworld will be available on the 4th of December!

This week I’ve been doing more work integrating all the biomes together. The amount of content in the map became a bit unmanageable so I’ve been working on extending the awesome map editor Sean wrote to make life easier. 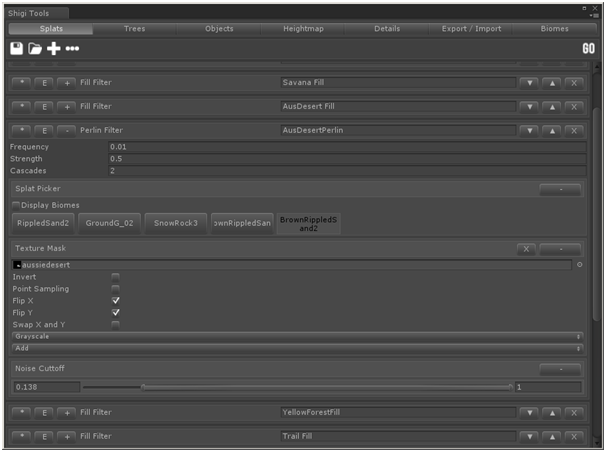 We will eventually release this as an SDK so you guys can create new maps. This is also a big step towards procedural map generation. We weren’t planning to do procedural maps, however the more complex the map gets the more we rely on procedural tools, no reason not to bring them into the runtime game.
I’ve also been testing some new landscape types like a grassy savannah to break up the yellow desert a bit.

Here’s one of the images I created for one of the Roach body skins. I wanted a graffiti style pattern to put on this one, so I had to create a whole piece for it. I thought the words ‘Hurt World’ are pretty apt for use as the basis. 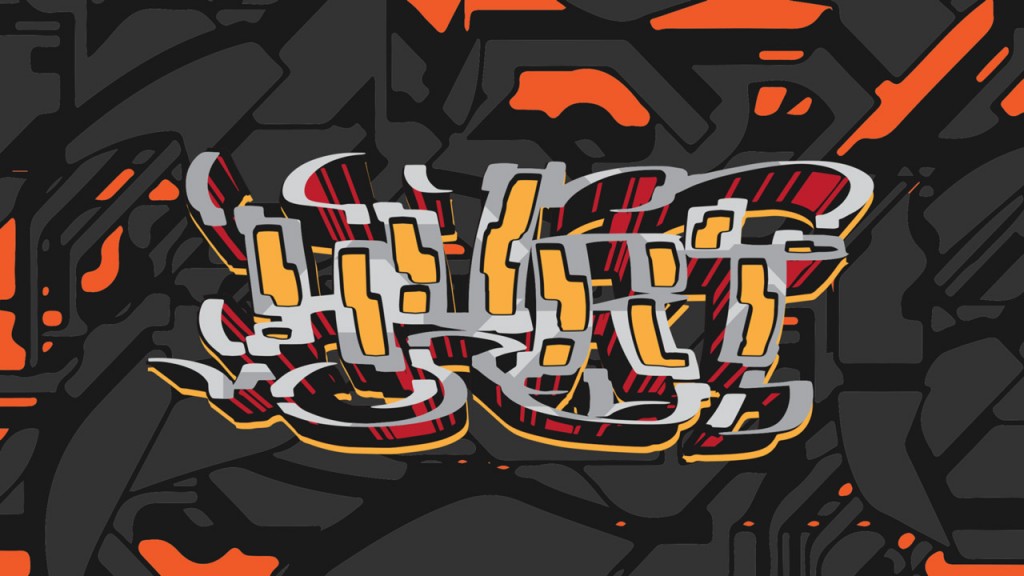 Also I am working on more body kits for the Roach, so that we will have a nice array of interchangeable components.

Finished up some of the environment work and am now currently going over some of the existing creatures and adding new skins. Displayed are a couple of the new Tokar skins, and one of a fairly scummy looking Bor….irradiated???? 😛 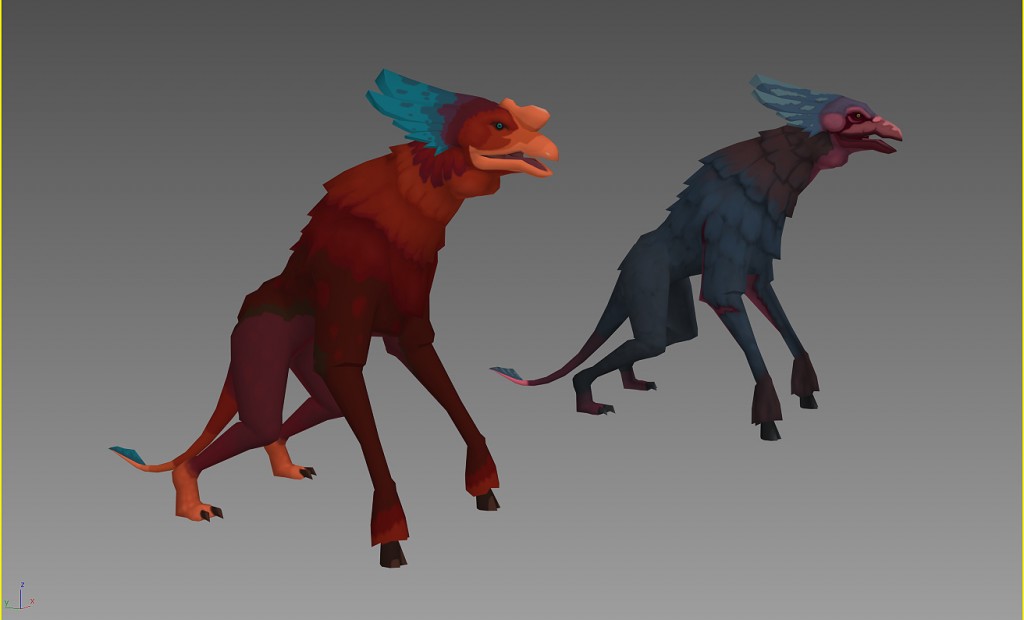 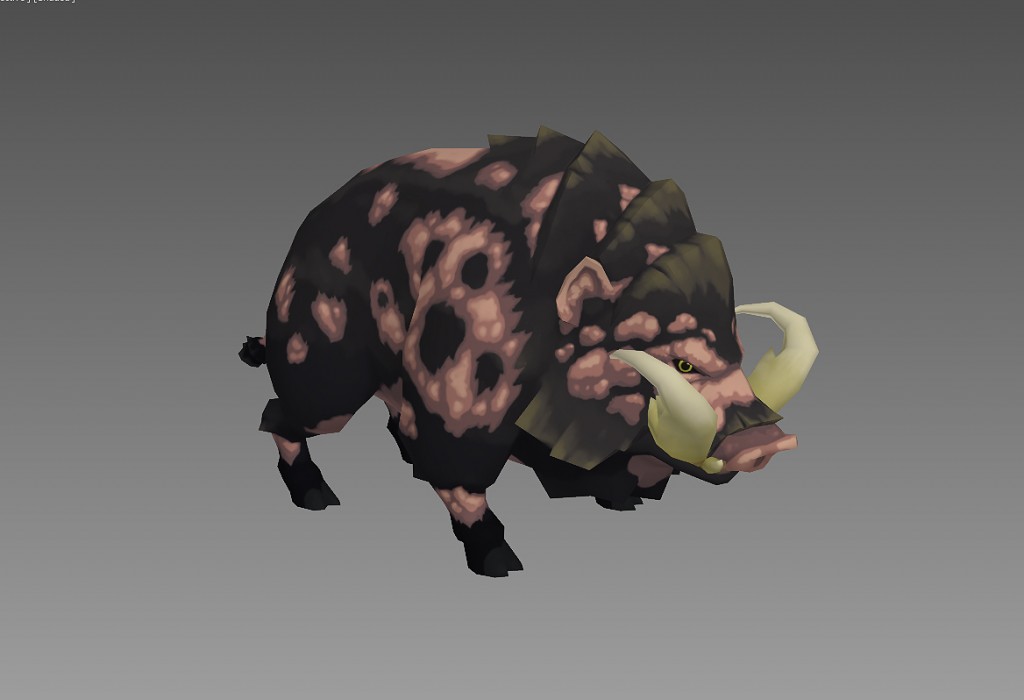 I am in animation revision mode. Throws have been finished and functioning, next up is making the rifle ironsighted animations feel less off balance. Laundry list of little glitches and stateflow bugs too. 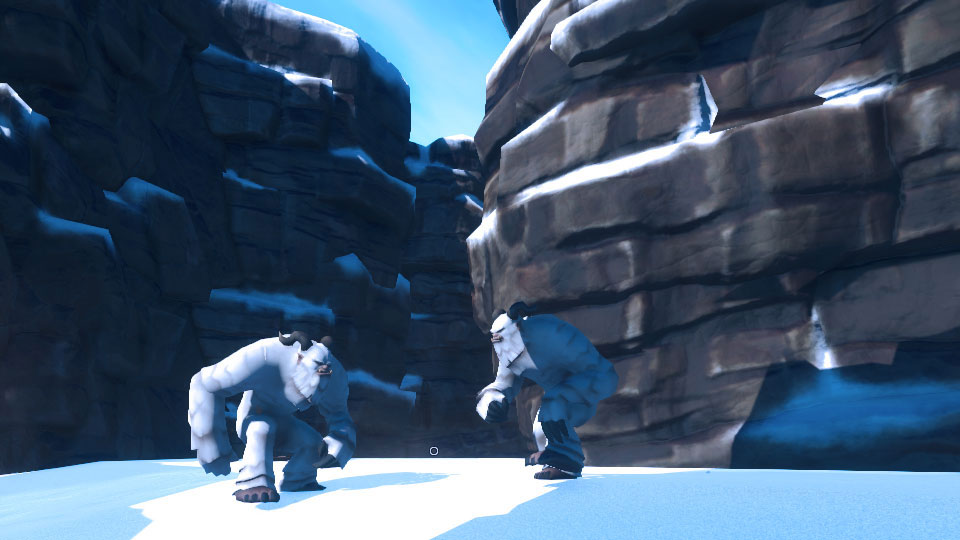 Hey Guys,
As we move towards EA release the updates will be more ‘status’, less ‘shiny content’. Here is what we are working on.

This week we moved offices (literally across the road) into a bigger, more permanent space. We’re all in one room now – before we were split over two, so that’s a big improvement for us. Check out the awesome Hurtworld poster, designed by Mils. 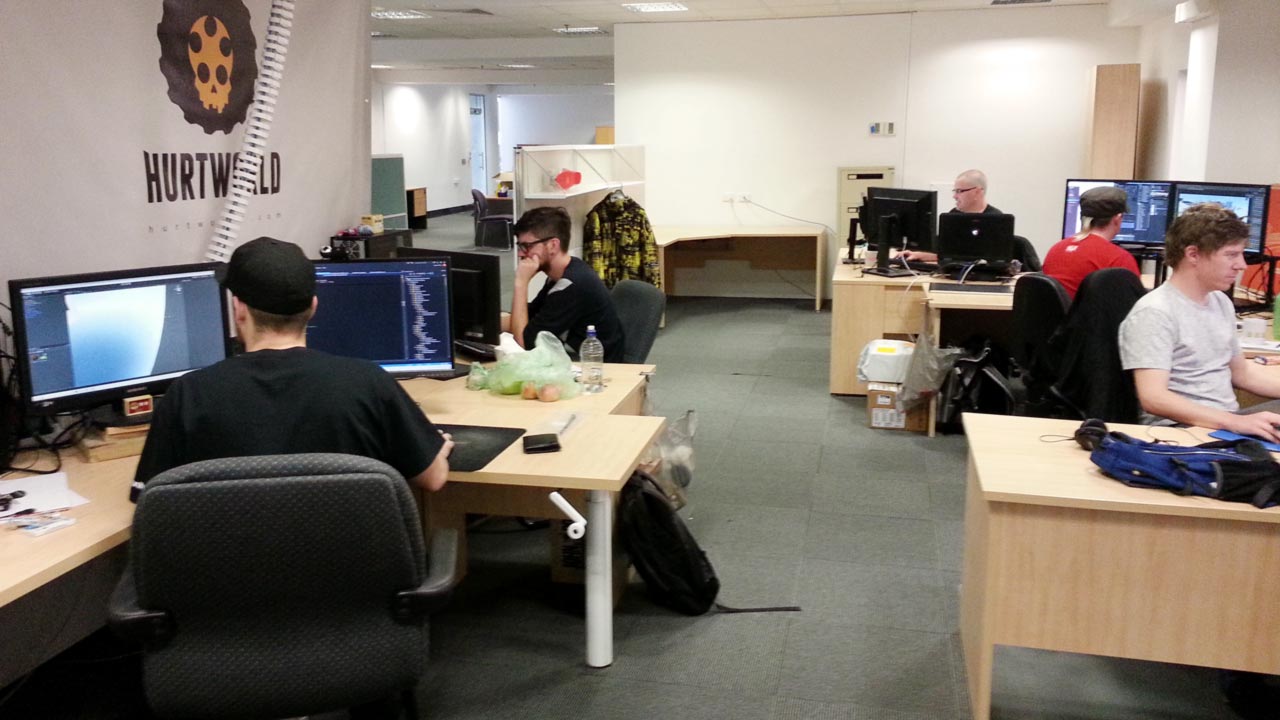 We also did a big merge – we’ve all been working on separate versions of the game for a while, implementing different features. Now, they’re all back into one version of the game.

This week has mainly been taken up by the move and the merge. Now all the steam changes are in one place, we go through the fun of integrating / balancing everything and making sure content is production ready. I didn’t get to revamp vehicles like I wanted to, that will have to wait a few days now. This week I will primarily be focusing on integrating all the new content in the map.

The more fleshed out the map gets, the more it feels far too big. I’m happy we pushed our tech to support such large areas without performance issues for later down the track, however just because we can doesn’t mean we should. We will be doing internal play tests toying with some new ideas to encourage player interaction.

The largest of the changes will be:

I want to create a slightly more hostile environment, while balancing this out with less death penalty. Hopefully this will make gunfights less one sided, and give people less to lose when leaving the house with gear on.

More on this soon

Following on from last week’s post, I have also been very busy building the panels and attachments for the vehicles. Here you can see a basic set of components designed to give both aesthetic and functional uses.
We can’t wait to see the crazy mutant combinations players come up with. Combining these with the skins I spoke about last week, will add a lot to the game.

Not much sizzle from me this week, as I have been mainly working on environment splats for the various biomes. The outback desert was looking a tad bland so I built a couple of custom plants for it. This one is a type of desert succulent. 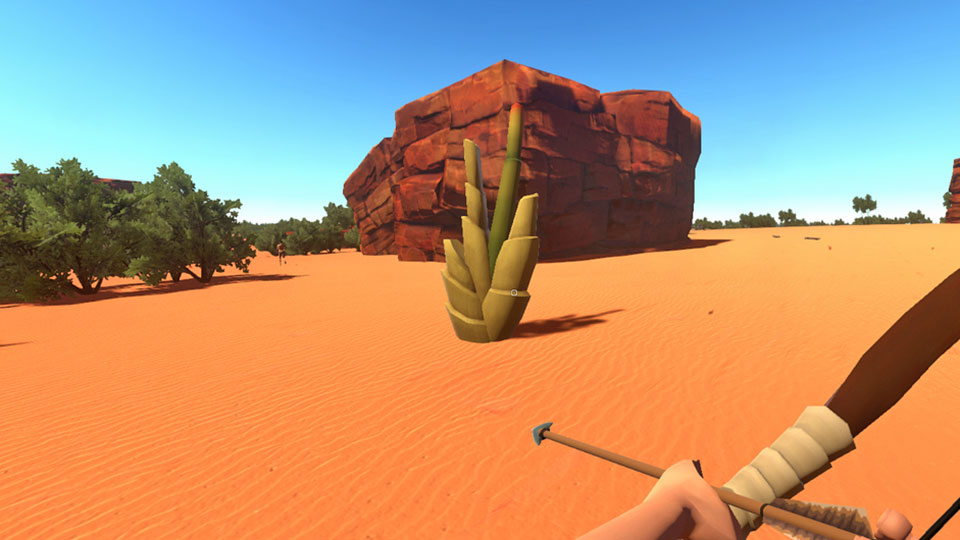 I am putting on my editor cap to get a trailer for EA ready.